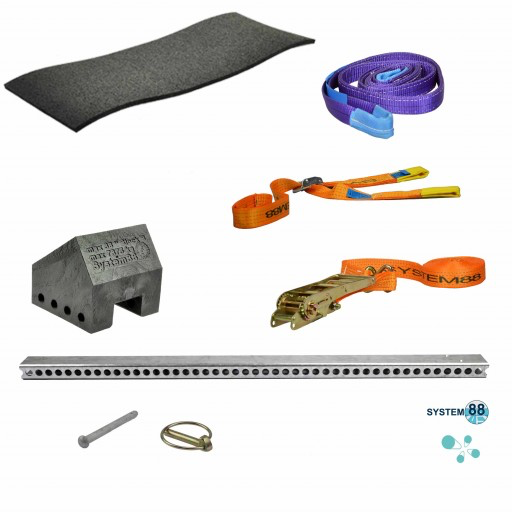 To complete System88 and to optimize performance and safety, additional parts are available. Handling and securing a pipe load for transport is done with Tie-downs, Anti-skid layers, Hoisting belts and Connector belts.

Tie-down: System88 Tie-downs are specially designed for System88. They have a very high Standard Tensioning Force (Stf = 750daN). A 20 ton (22 US ton) pipe load is secured with only 6 Tie-downs when combined with Anti-skid layers. This product is equipped with an ergonomic, long ratchet that needs to be pulled downwards instead of upwards. The label contains all by law prescribed details. The Tie-downs are divided evenly along the load and only tensioned when all are in place.

Anti-skid layer: Anti-skid layers have a frictional resistance of 0,6. Less Tie-downs are needed to secure a load by increasing the friction with Anti-skid layers. Anti-skid layers are strongly recommended and must be used in combination with Tie-downs. They are placed between System88 and the pipes, both top and bottom. Because of its softness, it will not damage any coatings.

Hoisting belt: Hoisting belts make handling mid-sections easier. Because weight can be high, assemblies of System88 are mostly hoisted by a crane. A hoisting belt is placed around the assembly and used to lift it onto the upper pipe layer.

Connector belt: Connector belts eliminate the risk of canting when loading one pipe at a time on a second layer. At each end of the rail a pin from the Connector belt is placed through a hole. When both sides are in place, the Belts can be tensioned.

… solutions for your pipelines